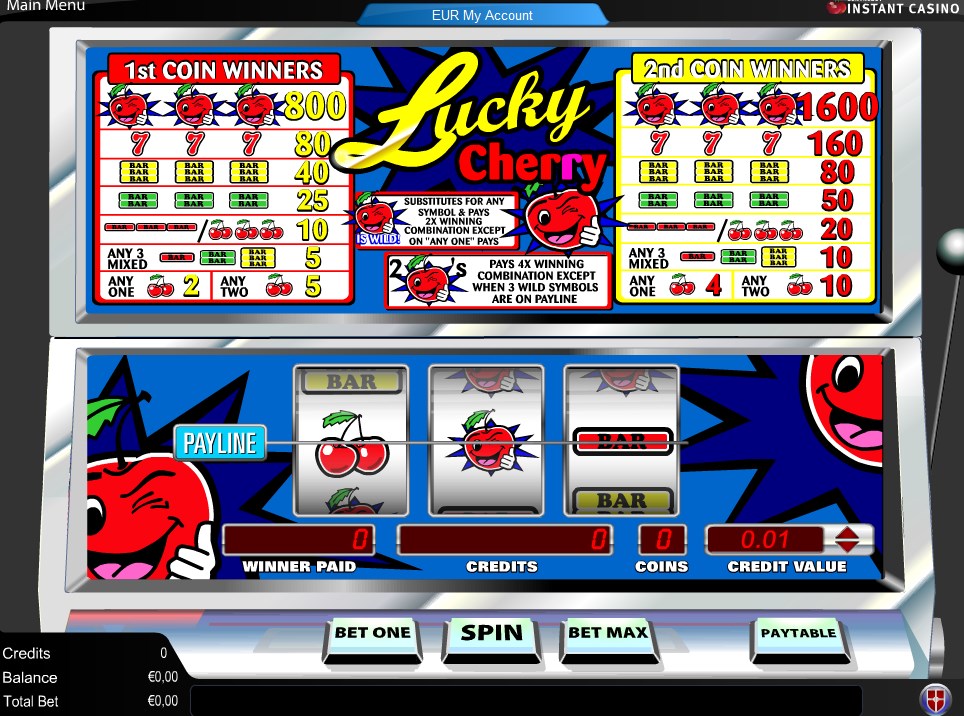 Lucky Cherry Slots is a very simple and strait forward three reel machine. Players shouldn’t be expecting to be blown away by any of the features included on this machine because, well, there weren’t any bonus features or special symbols included. This was really a mindless play and it really wasn’t meant to get you thinking all that much. In my opinion this was accomplished why sacrificing a lot of excitement that the bonus features can bring. The first thing I noticed about this machine were the symbols that the designers decided to use. I was pretty disappointed with them because there just wasn’t a large enough variety for my likings but I guess this was in keeping with the simplicity of everything else. Without a lot of different symbols though I felt the game got pretty boring and repetitive too quickly. The graphics on this machine were only good in the sense that I never ran into any type of glitch in the game play or additional loading screens once things were underway which helped things run smoothly.

The betting options offered on Lucky Cherry Slots were about as simple as everything else on this machine but I did think they were good enough to make the slot accessible to a wide range of players. The betting range was actually pretty well done as players could spin the reels for as little as a penny or for as much as ten dollars. There was only one pay line offered on this machine but I didn’t think this was too big of a problem as there weren’t all that many different symbols being used so the overall winning percentages weren’t drug down too far. The winning percentages were actually pretty good and I felt like I won more often then lost which is a great thing for a slots machine to offer.

Overall, I thought this was a very good slots machine for what it was designed to be. The designers knew what they were doing when they created a machine this simple and what it was supposed to accomplish. Though I personally don’t like machines like that all that much, as I just think they boring, I understand there’s a lot of players out there who just like playing really simple machines like this and I would highly recommend this machine if that’s you.