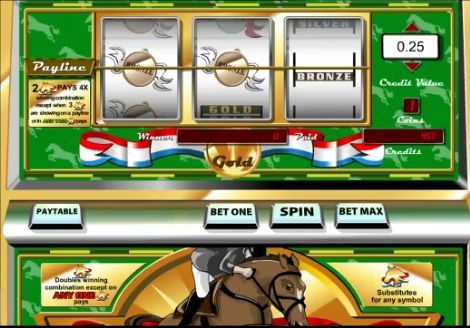 Jumping For Gold Slots is a very well executed three reel slots machine. There wasn’t really much offered in the form of bonus features but I thought that the features that were added really went a long way in providing a good amount of excitement and entertainment. The first thing I noticed about this slots machine were the pretty well done betting options. The betting range wasn’t huge by any stretch of the imagination but I thought that it was effective in making the machine very accessible as the reels could be spun for as little as a penny or for as much as fifteen dollars. There was only one pay line offered on this machine but this wasn’t a problem at all since the designers included a ton of different combinations that could be used to award a prize so all you had to do really was get a some symbols on the pay line and you were pretty much guaranteed a win. Along with all these various winning combinations there were also a lot of symbols. I thought this was a good thing on the whole because it prevented things from getting boring and monotonous too quickly which can be a problem on three reel machines.

The wild symbol offered on this machine was by far the most exciting thing offered on this slots machine. The symbol itself was a picture of a golden head of a horse. This symbol appeared on every reel and could be used to substitute for any symbol in the game. This coupled with the variety of different winning combinations available really proved to provide a winning percentage that essentially assured constant winning action. The best part about this symbol though, in my opinion, was the fact that this symbol also served as a prize multiplier. Whenever a wild symbol was used as apart of a winning combination the prize awarded was automatically doubled and if two wild symbols were used the prize was automatically quadrupled. This was a very well placed wild symbol and really led to just about all the big prizes to be won on this machine.

Overall, I thought this was a solid slots machine. It definitely wasn’t intended to be played for extended periods of time but I think that the few features that were added on this machine were provided for an exciting play in the short run. Sometimes its nice to just hop on a mindless game like this and just get in some good old classic slots machine play. I would definitely recommend this machine as a break from the feature heavy five reel machines.