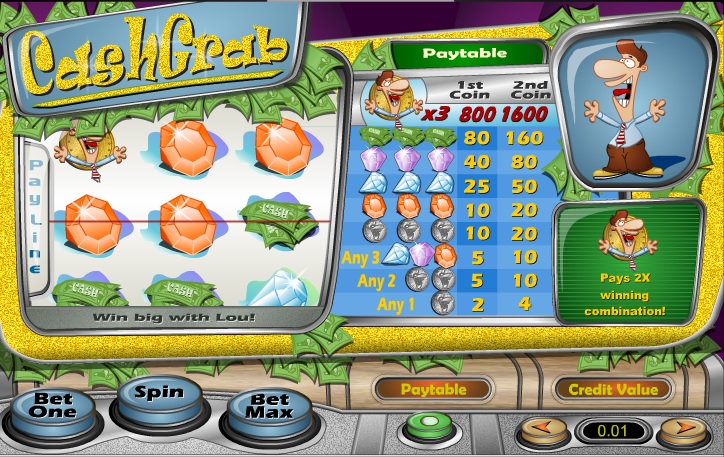 Cash Grab Slots is definitely kickin’ it old school as the designers decided to create a very simple machine that had a very classic feel to it. There was only one feature included on this machine, a wild symbol, and this provided for a pretty mindless play. I think this was the intent though as sometimes it is necessary to take a step back from all the feature heavy five reel machines and to just get back to the roots. The first thing I noticed about this slots machine were the symbols. I thought the designers included the perfect amount of symbols on this machine. There weren’t so many that the winning percentages were drug down to unacceptable levels but there were enough to ensure that it would take a good amount of time before things got repetitive and monotonous. This was also a machine that is accessible to a fairly large variety of different players and bank rolls as the reels could be spun for as little as a penny or for as much as ten dollars. This isn’t a huge pay range but it definitely gets the job done.

The wild symbol offered on Cash Grab Slots was a picture of the face of a pretty weird looking man with his hands held out as if he were about to grab for some money. This symbol appeared on every reel and could be used to substitute for any symbol in the game. I really liked the fact that it appeared on every reel because it really helped raise the overall winning percentages not that the game needed it all that much but it was definitely a welcome addition. The best part about this symbol though was that it also served as a prize multiplier. Whenever one of these symbols was used as part of a winning combination the prize awarded was automatically doubled and if two were used then the prize was quadrupled. This symbol was definitely the focal point of the entire machine and I thought that it successful brought a fair of amount of excitement to the overall gaming experience.

Overall, this was a great slots machine for what it was designed to be. The designers weren’t trying to blow players away with a bunch of fancy features but rather they just wanted to play to the essence of what a slots machine was. I thought they were very successful in doing this and I really enjoyed myself while playing this machine. If you’re looking for a simple three reel slots machine then I would highly recommend Cash Grab Slots.